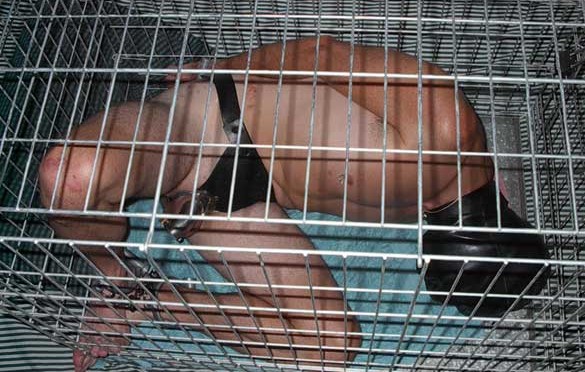 I ride a Suzuki GSX-R600.  Sportbikes and sportbike riders turn me on.  I love nothing more than a hot guy clad in sportbike leathers, especially on a hot day when you know sweat is running down his body, pits and crotch—ripe and ready for licking.

A few years ago I had planned on a summer weekend overnight at buddy’s house in a city about 110 miles from the small town where I lived.  This buddy used to be sort of a master for me, but by now our relationship had evolved to more of friends with bondage benefits.

My motorcycle allows no space for gear, just a tiny spot under the seat large enough for a wallet and maybe a toothbrush.  So, the plan was for me to wear my leathers with nothing but a jockstrap on underneath, my racing gloves, boots, and full face helmet.  I would carry nothing but a wallet in the space under the seat.  If needed I could wear some of my buddy’s clothes when I got to his house, but usually I spend all the indoor time either naked or in my jockstrap, and we was planning on going out to the Eagle in our racing leathers.  The two hour ride to the city wound through some pretty scenic countryside, so I was looking forward to the day.  I planned the route out all on backroads, ’cause interstates pretty much suck, especially on a bike.

END_OF_DOCUMENT_TOKEN_TO_BE_REPLACED

This establishment has a great gym, with all the free weights, benches, Smith machines, and other equipment any decent gym would have. Since I needed to work out, I figured I would work out first and then try to get in some trouble in the rest of the bathhouse. Every time I go the gym, I have this fantasy of working out wearing only my jockstrap, and this seemed like the perfect place to make that fantasy come true.

With me only in a jock, you (being a Metalbond reader) can definitely tell that I am in chastity; the outline of the lock is obvious. However, most non-kinky gays have no idea what chastity is, and while they may notice something strange, couldn’t identify a locked cock if it slapped them in the face. Feeling slightly embarrassed, and also slightly proud because I’m in decent enough shape and feel like I can hold my own in a jock, I set out to the weight room.

END_OF_DOCUMENT_TOKEN_TO_BE_REPLACED

A few years back I lived in a small city in the Midwest. I used to work out and swim at the local YMCA, which had a great gym and an Olympic pool. One of the lifeguards at the pool, Nate, was a good-looking gay guy whom I fooled around with once. Nate was in his 20s, nicely muscled with a light blond furry body and big uncut cock. He was also one of the nicest guys you’d ever meet. Back then we were friendly, but not really close friends.

Last summer I was visiting the town, and I ran into Nate while I was having drinks with friends. We chatted, and he said he was working at the Y the next evening and suggested I go for a swim before closing time. I was more than excited to go to the Y, not just because of Nate, but because I was locked in Steelworxx metal chastity cage, and I love working out locked up.

END_OF_DOCUMENT_TOKEN_TO_BE_REPLACED 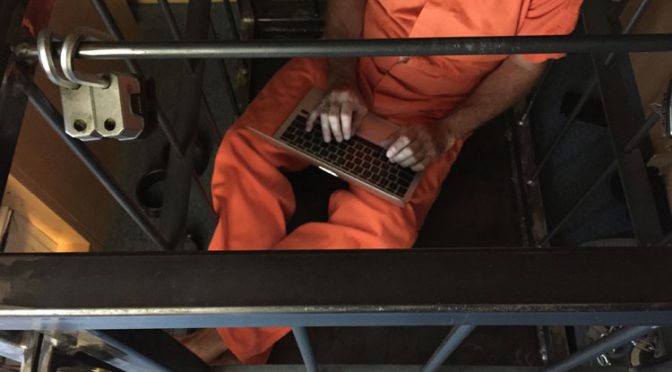 After two days, I had pretty much settled into jail routine. The mornings were nice; I’d wake up to the soft light at dawn, and drowsily drift in and out sleep with the sounds of the town waking up in the distance. The light would gradually bring the details of the cell into focus — the giant rivets, the steel walls, the steel L-brackets welded to the side walls, the glimpse of the cellblock through the steel bars of my cell doors. I’d become more aware of the smells of steel and concrete, and eventually I’d get up and piss a stream into the bucket.

Since there wasn’t a table in the middle cell, and now I was supposedly a “medium security” risk, the jailor fed me my meals at the table in the cellblock area. He unlocked the padlock on the door of cell, exited the cellblock, slammed shut the cellblock door, padlocked the two huge sliding bolts on the cellblock door, then unlocked the sliding bar locking mechanism that locked and unlocked all three cell doors simultaneously. Then he told me that I could push open my cell door and enter the secure cellblock area. He pushed my cereal and banana through the handcuff slot, and I sat at the small table to eat my breakfast. I would’ve given my left nut for a cup of strong black coffee, but I knew better than to ask.

END_OF_DOCUMENT_TOKEN_TO_BE_REPLACED 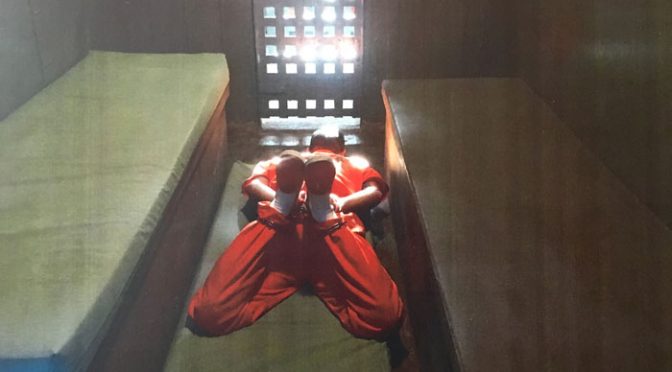 For some reason, calling the jailor “Sir” or “Officer” just rankled me, and I resisted doing so. I guess I also gave him some attitude, although I was nicer when he had something I wanted, like a meal.

Once or twice a day he would conduct a cell inspection, looking for contraband I guess. He went through the whole unlocking the cellblock and cell routine, had me nose to the wall, and he cuffed my hands behind my back. Then he turned me around and locked the handcuffs to the metal L bracket that was fastened to cell wall. So now I am shackled, chained to the wall with my feet, and my handcuffed wrists are slightly elevated behind my back and locked to the wall. I couldn’t move much at all. The jailor then inspected the cell, looking under and checking the seams of the mattress and pillow, unfolding the blanket, and examining the entire cell.

I gave him some attitude during the first inspection, and when he uncuffed me, he shortened the chain to my shackles so that I could only move a few feet.   Then he repeated the lock down process, and after the series of banging and clanking, I was again left alone in the dim cell, only know a little more severely restricted. I could still move a bit, but no more pacing the length of the cell. I could lie down since the foot of the bed was close to the point where the chain was attached to the wall, and I could stand to piss in my bucket if I needed. I don’t know how long I stayed like that, because, like I said earlier, time seemed pass both slowly and quickly.

END_OF_DOCUMENT_TOKEN_TO_BE_REPLACED

About six weeks ago, a friend of mine sent me an email with a link to a website for a jail in Iowa. Not an ordinary jail, but an old, historic jail that someone had purchased and is now offering to incarcerate people for a fee. The pictures of the place were hot as hell, an authentic old county jail built in 1880 and used for over 100 years. The place looked tiny, only three cells, but it was a real jail and looked a bit hardcore.

I knew right away that I couldn’t pass up on this opportunity. It turns out I had some unused vacation due, so I emailed the jail and set up a three day visit.

For the next six weeks, I have been obsessively poring over and over the pictures and instructions on that website. I planned out a two-day drive to Iowa, and endlessly fantasized about my upcoming jail stay.

The jailor emailed me to park next to the jail, and he will meet me at my car. I’m expecting to be ‘arrested’ at my car and brought into the jail in handcuffs. The jail is located downtown in a small Iowa town, next door to the Methodist church. Since I’m showing up at noon on Sunday, I’m a little worried about church goers and passersby seeing me as I get brought around to the jail entrance, which is on the opposite side of the building than the parking lot. But, I guess that is all part of the experience. I’m not sure what is more humiliating, being a convict or being a pervert who pays to have someone lock him up in jail.

The jailor instructed me to park in the parking spots off the alley to one side of the jail. I parked underneath the barred windows of the jail, and in seconds the deputy was coming out a door on the side of the building, yelling at me to put my hands on the steering wheel. Before I knew it, he had me with my hands on the roof of the car, and then cuffed with my hands behind my back. He emptied my pockets and gave me a pat down before marching me around the back of the building to the entrance to the jail.