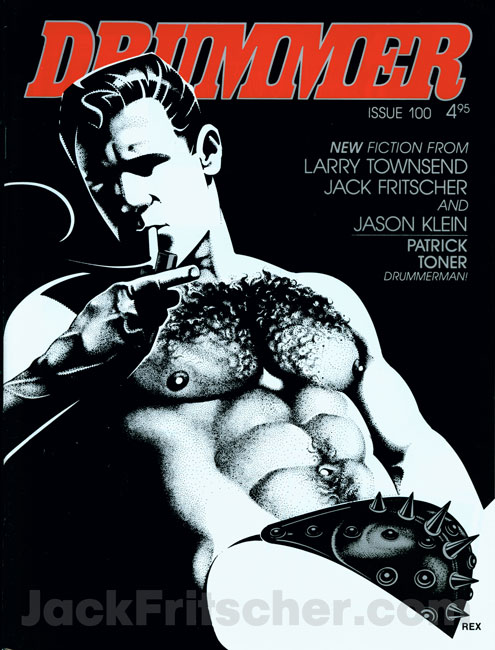 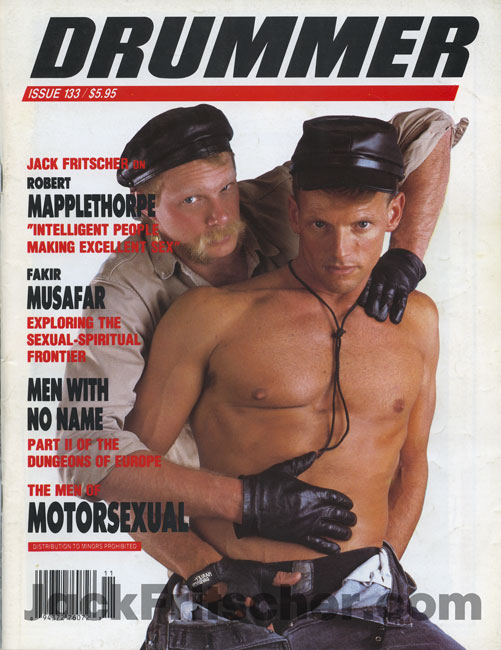 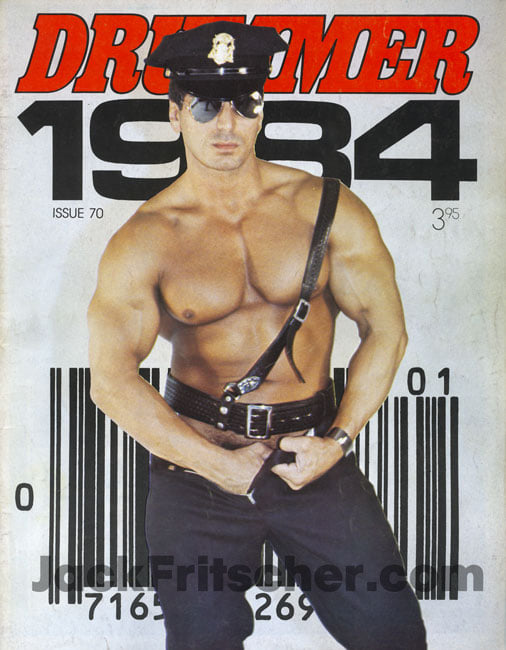 I caught this new documentary recently down at Cinema Village on 12th Street, and I really liked it. It’s got some fantastic interviews with his family, his lovers and many others. They talk about New York’s gay leather/BDSM scene in the 1970s, the Mineshaft, Drummer magazine, and lots more. Here’s the trailer:

I have a much greater appreciation of Mapplethorpe as an artist, having seen this most excellent tribute. See this if you can.

Does anybody remember Drummer magazine? It was hot as fuck. Before the Internet, there was an extensive selection of scene-related publications, mainly published in the 1970s to the 1990s. These magazines included DungeonMaster, Checkmate, Metropolitan Slave, Manhood Rituals, MACH, Manifest Reader (my personal favorite!), the Zeus Inferno albums and other Zeus one-offs, most of Larry Townsend series, the Robert Payne series — and of course the crowning achievement of them all — Drummer!

And then came Bound and Gagged magazine — and my whole life changed because I knew I had to move to New York City.

Here are some more books by Jack Fritscher: “If you wish a hot link to my Drummer book from 2008, ‘Gay San Francisco: Eyewitness Drummer,’ you can find the linkage on the first page of my site. It is also available as a paperback and Kindle at Amazon. In the Kindle, all the graphics are in color. Even so, this book can be read free at my site, although without the 300 illustrations. GSFED won the National Leather Association International award for best nonfiction book 2008.” “‘Leather Blues’ (1972) was partially serialized in Drummer. This novel of a young man coming out into leather luckily remains of interest to younger leatherfolk finding it in the new Kindle edition.”

Speaking of Jack Fritscher (see last week’s posting) there is much more to share. Many of you guys remember the Jail Training Center/Academy: Well, Jack Fritscher was there! He writes:

“My longtime friend, Chip Weichelt, was the founder of The Training Center Academy. I worked as producer on several of his films, especially his first, ‘Atlanta Knights.’ As the founding San Francisco editor or Drummer magazine, I went undercover for Drummer, with Chip’s cooperation, and wrote a Drummer feature article about the Academy in Drummer 145, January 1990.

To read that story, plus Jack’s detailed history of Chip, his life, and how his Training Center and videos were created, click here.

Metal would like to thank Jack Fritscher for sharing this stuff!

The Leather Journal has published a really good interview with Jack Fritscher — a writer, journalist, photographer and longtime editor of Drummer magazine. To read the interview (recommended!) click the picture directly below to be taken to The Leather Journal: For those of you younger guys, Drummer magazine was THE PLACE to go for gay men into kink, back in the pre-internet days. One of Jack’s many books is Leather Walk of Fame, a look back at Drummer magazine. Also you can find his many books — both fiction and non-fiction — at Amazon.

NOTE: Leather Walk of Fame is forthcoming later in 2015. However, Mr. Fritscher has posted the text of that book, plus the texts of all his books, as a “Leather Community Service” to give free access to all — so that no one has to pay anything to read or write about their leather history.

You can find these books and much more about Jack Fritscher at his official website.