It was crazy what we were doing. Why? Adin was clearly devastated, just as I had been the day before. But this was his second time, and I knew in my heart that I would do it again if I got the chance. Even knowing that while it was happening, I would know, again, beyond any doubt, that I had made a terrible mistake. Even before Adin showed up with his improbable drug, I had spent a lot mental energy on figuring out ways to make that unbearable feeling last. I had told Adin that this drug was too much, way too much, because the need outweighed the pleasure; but at this point I was wondering how many doses were in the canister, if I’d ever get my hands on it again, and if Adin or someone would administer the rites, as it were.

I said ‘Adin or someone’, but I meant Adin. I had received his message loud and clear, I thought, about our relationship; but this was something else. We now shared a bond of a different sort. It really was a rite, a rite of passage, that we two, and no one else, had survived. I had called it a near-religious experience, but now I was taking the notion more seriously. I knew, for instance, that if I ever did find someone I cared about as deeply as I did Adin, that I would want him to share this rite with me, with us.

Adin had quieted down. “Fuck me.” he said. He said it in the tone that meant jeez I’m over-wrought .

“So, would you say stimulation adds a little something to the overall experience? You should be taking notes, you know. For science.”

END_OF_DOCUMENT_TOKEN_TO_BE_REPLACED

I shook my head. He just stood there with his arms crossed.

“You said it was worthwhile…”

I felt the blood rush from my head, AND from my dick. HE had actually crossed one of MY boundaries; one I didn’t know I had, because this scenario had never occurred to me. Not with him, not with anybody. “This is too much for me,” I muttered. I set the bulb down on the counter and started to leave the bathroom. He grabbed my arm and spun me around to face him.

“You’re just trying to push buttons now, aren’t you? See if you can reach my limits? Well you have.”

I grabbed the enema bulb and shoved it in his hands. It squirted some water from getting squeezed. “You’re not a kid, I’m not a dad, and neither of us are into that sort of kink.”

END_OF_DOCUMENT_TOKEN_TO_BE_REPLACED

I woke before Adin. I actually felt pretty rested. We had moved around in our sleeps, so it was easy to slip out of bed without waking him. I stood staring at him for a while. God he was so beautiful! And he was in my bed. I rubbed the front of my chastity belt in appreciation.

I looked down. Like I usually do, I had morning wood, squeezed on all sides by the steel tube. Was I still in the grip of that devastating drug? Right then, there was no difference.

I ambled in to the bathroom and drained my bladder. This time I was able to clean up the belt properly. As I was sitting on the john, I thought back on the night before. It was physically and emotionally the most intense night of my life. I felt another surge of gratitude for my friend Adin. I wondered how I could return the favor.

That’s when I had a wicked idea.

It was very wicked. My cock struggled to split the steel tube it was in.

I knew it was wicked, but hadn’t Adin said something about me needing to go with my feelings? I thought about this as I went back to my bedroom.

He was still asleep.

END_OF_DOCUMENT_TOKEN_TO_BE_REPLACED

I was blushing furiously. This was the part of my toy collection that I had never shown to Adin. It seemed like an obvious bridge too far for a straight friend.

Now he was sitting naked in my living room, with me trussed up in leather and steel, my hormones set on an artificial rampage by an experimental drug, and he had been examining things that had been in my ass. With a desperate expression, I shook my head back and forth. This can’t be happening!

He smirked at me. Christ, what had gotten in to him? I’d known him for years; I knew him so well I could pick out girls he would find attractive; so well that I knew he would be glad for me that I got a new toy and no, he would not like to try it on.

The stuff that had gone on tonight was enough to make me wonder a bit about just how straight he was, but it had all been within the range of the secret fantasies in which he starred. But I never, never thought he would be anything but grossed out by ass play of any sort.

I was starting to wonder if I was hallucinating this whole night.

Looking concerned, Adin unbuckled the pecker gag and took it from my mouth. He set it on the coffee table, asking “Is something wrong?”

“Dude, that’s what I want to ask you. What is going on with you tonight?”

“This isn’t like you at all. I mean, I get why you would want me to try your new drug, and I appreciate it. I really appreciate you letting me open up to you too. But I feel like you’ve turned into an entirely different person.”

“Don’t you like this person?” He sat down facing me, legs extended, leaning back on his hands. It was such an open, inviting pose. And he was buck naked.

END_OF_DOCUMENT_TOKEN_TO_BE_REPLACED

While I was trying to cool off mentally, Adin went to the kitchen and came back with the water bottle refilled. He tipped it up for me and I guzzle a bunch. I had been sweating like crazy. I looked over and saw that my sofa cushions would be going to the cleaners soon. It was a small price to pay for the experience I was having. I wanted to talk with Adin about the drug experience itself, but first I had to pee. I told Adin this, hoping he might let me out of the straitjacket, but he just said, “Down the hall to the left,” so I squared my shoulders and embarked on a rite of passage of sorts.

The chastity belt actually helped with this, directing the stream downward. Unfortunately, I couldn’t wipe any remainder dribbling from the drainage holes. I did a little twerk over the toilet, hoping to shake most of it off, then went back to the living room.

Adin was sifting through my other toys. “Looking for something for you to wear?” I asked.

He picked up a pecker-gag.

He paced towards me, gag raised. I backed up a step, “Just wait, please. I love that gag, but can we talk some more first?”

END_OF_DOCUMENT_TOKEN_TO_BE_REPLACED

Adin had said the paralysis was wearing off, and I definitely had control of my voice again. If I didn’t get moving right away, Adin would keep me stuck here all night.

Were my toes wriggling? Could I twitch my fingers? Nothing. This was weird stuff.

Adin came back into the room with a pile of my gear.

“Forget it Adin!” I said firmly with false bravado, “not gonna happen.”

“Stand up and tell me that to my face!” he said scornfully.

“No Adin, I’m serious! An hour’s enough already.” The thought of Adin putting me into bondage, using my own toys, was like another dream come true, but I really didn’t know if I could handle it, given the state I was in, and what had already happened in just the last 40 minutes or so. At the same time, my hypothalamus texted a command down to my groin: Make it so.

END_OF_DOCUMENT_TOKEN_TO_BE_REPLACED 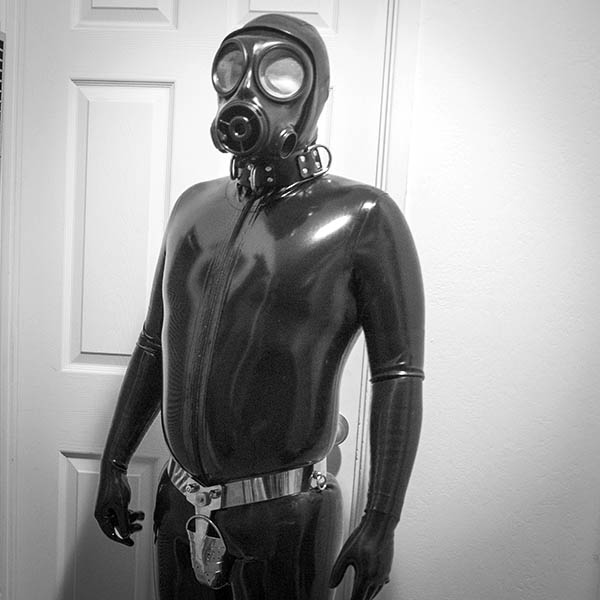 Finally I was getting the relief my body had been craving desperately for… less than 10 minutes???

My attention was drawn away from the beautiful sight hovering inches away from my eyes, back to the center of my helpless body’s universe. Dang I’m poetical. With just a touch from his hand, I sensed the familiar climb to orgasm, and it felt like it was going to be particularly strong.

I can’t describe to you how deep the need is when this drug kicks in. There was no enjoyment of the rising pleasure, no giddy anticipation, no urge to prolong the feeling of horniness. Pure animal lust overrides all other considerations, and this makes the immobilization of one’s limbs particularly cruel. In fact it was unbearable, not that that changed my situation (is something you can’t bear but have to bear anyway actually unbearable?).

So I was feeling relief and happiness when Adin gave my cock one stroke. Then he took his hand away, and I was plunged into shock and dismay.

END_OF_DOCUMENT_TOKEN_TO_BE_REPLACED

How dumb did my best friend think I was?

“If it has ‘unfortunate side effects’, why do you think I would let you dose me with it?”

“I mean ‘unfortunate’ like I won’t be getting a bonus this year. It’s just as safe as the other analogs we’ve been testing… well, if you get comfy before you take it.”

“The lab’s not going to be able to market it. No way the FDA will pass it, and if they did, almost no one would buy it.”

“Dude, I’m really not interested in your company’s bottom line — or your Christmas bonus. Tell me why I should take some un-tested drug from your lab.”

“Oh, it’s tested. That’s how it got cancelled. And it passed all the usual safety trials. It won’t make you sick or elevate your blood pressure like the original peptide. It won’t give you a weird splotchy tan or a tomato-red face. Etcetera etcetera.”