Actually, it was like, two rooms, one for the workie and one for the shopper. On the shopper’s side of the room there were two or three nice comfy chairs and a nice wooden table, with something that looked like a big notebook or catalogue that was open on the top. Then there was a polished wooden barrier, about three feet high. Then there was a space. Then there was another kind of barrier. This one went from floor to ceiling and was made out of steel fencing. Yeah, the kind of thing they make fences out of. After that, you were in the workie’s room. Where I was. I don’t need to tell you that there wasn’t any furniture on my side of the room, unless you count the two cams hanging from the ceiling. The lack of furniture made it easier for me to pace up and down, waiting for someone—Mike!–to come through the door on the other side.

By the time he did, I was completely revved up. And he was looking his best. I always liked him in those long, loose sweaters. The drapery showed whatever muscles he had. Surprisingly, his new slacks were perfect. Despite my not picking them out for him.

END_OF_DOCUMENT_TOKEN_TO_BE_REPLACED

I woke up pretty slowly the next afternoon. Mike wasn’t there. He must have seen how passed out I was and figured it wasn’t safe to get me up. He was probably at his office. Maria had left some coffee and a tray of croissants and fruit and little slices of ham—very tasty, despite her being a bitch. I gradually recalled what had happened the night before. I was just as mad as I was then, thinking about those mean things Jerry had said, and how he’d taunted me. And what I’d agreed to do. I’d agreed to become a workie! How did that happen? How could that possibly have happened? I was confused . . . . And at that moment, my phone went off. Jerry, of course. Why not?

“Carson? Mike’s not there–I guess I can talk to you. You remember what we talked about last night? Vaguely? OK. I called the guy at WORC that I mentioned last night, and he was free for lunch—actually, I think he always is. Some people are. So I fed him some drinks and he said sure, you can be a workie. Just like we planned.”

“I left him a couple minutes ago. It’s all fixed up. All you quote need to do unquote is write something on social media about how great the WORC program is–great, but demanding. I know you won’t do that, and he knows that too. But it’s all set up. You’ll have your two days as a workie.”

END_OF_DOCUMENT_TOKEN_TO_BE_REPLACED

Four hours later, I’m still hard and my cock and balls are aching like I wouldn’t believe possible. But I’ve managed not to cum and I haven’t incurred any more penalties. As I shift uncomfortably, I reflect that might not last much longer and I might be about to lose another 3 hours. My cock and balls are trapped underneath me and are pressing against a sheepskin rug that tickles them with every slight move of my body. My freshly re-shaved head is covered with a rubber muzzle that has been strapped tightly in place and locked on, over the familiar ball gag. Apart from that and the rubber slave collar, I’m naked.

I groan and feel my chest dip towards the ground and I wince with strain as I stop myself. My hands are behind my back and secured together with padlocked restraints. My biceps have straps around them and they are linked by a strap that has been tightened as much as possible. Restraints are around each ankle and they are locked together as well. Then, my ankles have been pulled up behind me and locked to my wrists, keeping me in a loose hog tie. I am lying on my front, my crotch rubbing against a sheepskin rug. I am keeping my chest off the floor, because below my bulging pecs are 2 press buttons. If I relax enough to drop my chest onto the buttons, a bell will ring – and 3 hours will be added to my time. But if I can keep my chest off the buttons for 45 minutes, I get 6 hours taken off my time.

END_OF_DOCUMENT_TOKEN_TO_BE_REPLACED

Click and listen to the update from the “shackled bare feet” prisoner!

Thanks to Metalbond reader Phil for finding this guy!

Based on a true story

He then sat down in that sexy chair and said, “I am about to lay out the ten basic ways you will be transformed into the perfect pet husband so play close attention…

As he said that, he stopped. He then told me to take a moment to take in my new environment and to begin to feel my submission creeping in. He said that Alan had told him I always loved the feeling of a hood, so they had the one I was now locked into custom made for my head with the idea that there might be times when I would be wearing it in excess of 24 hours. He told me to begin to find peace in this hood, and as he talked, I could feel it becoming more and more of a safe space to me. This hit a spot with me and, to this day, I crave that Alan will put me in that hood at least some point every single day.

When he knew he had relaxed me, Todd sat back down in his chair and stared at what would have been my two blue eyes looking out of darkness toward him. He said, “Alan has spent months deciding on what your new life will look like and he then asked me to weigh in on it and this is how we came up with the idea of these two weeks of immersive training. The following is a list of ten truths that will come to define you every single day of your life moving forward to some degree or another.

END_OF_DOCUMENT_TOKEN_TO_BE_REPLACED

For those whose fantasies are on the extreme side 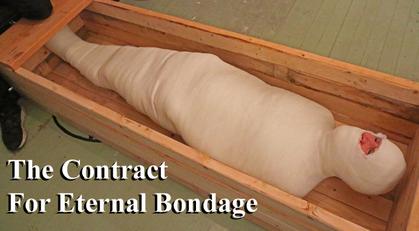 The slave is kneeling at what we call “a kneeling-rest”. Its hands are behind its back, each grasping its opposite elbow, with the forearms aligned and parallel to the floor. The head is bowed, eyes open, focused on an imaginary point on the floor several feet ahead. Its knees are spread wide, its ankles less so, toes bent and planted firmly on the floor behind its buttocks. It rests half way between an “upright kneel” and “sitting on its heels”. The strong thigh muscles draw the eyes in, and frame a glorious set of genitals, hanging invitingly as if being offered to their owner – me.

Its cut cock is impressive at about 7 inches soft, 10.5 inches when hard, with a slight downwards turn and a striking mushroom crown. The rod has excellent girth and arcs over two hairless golf-ball size globes, gorgeous to behold. The penis is rock-hard and dripping pre-cum, as it always is when in the presence of its Master. It’s a Pavlovian response. The mere thought of its Master will result in an instant erection. Training is a wonderful thing.

I am on the cusp of a dilemma. An hour ago, I received a call from the client who ordered this wonderful piece of beef. The customer has had a change of mind and asked if we could negotiate a deal that will allow him to take delivery of only two of the three slaves he ordered. He’s a good patron, having purchased a lot of product in the past, so I don’t want to upset him with a refusal.

END_OF_DOCUMENT_TOKEN_TO_BE_REPLACED

Things are quite leisurely at the training facility with only two slaves in stock. It was wild a few weeks ago because we had eight on the go but, as it is, I feel like I’m on holiday.

Shit-head has been with us a few days now. So far, it’s spent 24 hours isolated in its pod, exercising and learning how to drink from the water dispenser. Following that, it spent the best part of a day hanging in the factory area being broken. Like its peer resident in the next pod (piss-slit), shit-head has also been through its very first training session, lesson one – SPEECH LAW NUMBER 1.

Today, it’s SPEECH LAW NUMBER 2 and shit-head is already in place, eager to begin (I’m sure).

My little brunette fire-plug is standing in one of the classrooms, one foot on each of two large blocks. The blocks are 3 feet apart so its legs are spread wide. Wrists are in 18th century iron shackles and pulled straight up, forcing the slave onto its toes. It still wears the heavy ball stretcher that it’s involuntarily had to endure for several days, making its balls ultra-sensitive and very tender. Around its neck is a shock collar, the remote control handily in my jeans back pocket.