“Uncle James”? Wow, I had forgotten this was what Cody called me when he was a little one. Back then his father and my business partner, Warren, used to bring him to the office when he was out of school for some reason, but mostly at that point the business was small and personally we were broke, so it was the only effective way to do this. He always busied himself on one of the extra computers, so we didn’t have to worry about it. As the years went by I followed his high school graduation and entry into college with great zeal, but somewhere around his sophomore year, Warren stopped talking about him and would go very vague when questions were asked, so I just stopped asking, assuming he had an issue with grades, etc.

But, before he could say anything else, Todd grabbed Cody’s leash and pulled him down and gagged him. Todd said that tonight I was to practice my sucking skills with a new live volunteer, and he placed Cody just in front of me where I could engulf his dick while still being impaled by the machine. Cody was specifically told not to climax, no matter what, so secretly I made it my mission to do my best to make sure that happened because I wanted to see for myself what “no matter what” actually meant. However, I did my best and got him close, but he was, apparently quite well trained as when I would feel him swell, I could immediately feel him control it as well. It wasn’t long before Todd, looking tired, announced it was bed time and told me to go the bathroom, do my business, and then head to my cage which just was starting to sound normal to me. Leaving Cody in place where he was, I looked back and smiled before heading out.

END_OF_DOCUMENT_TOKEN_TO_BE_REPLACED Into haircutting? See more like this at Haircutting Cinema 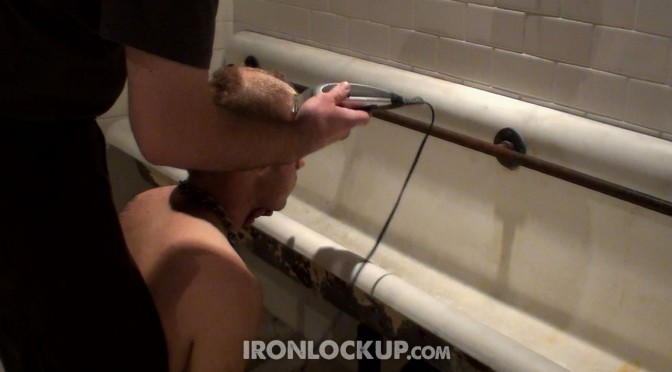 The prisoner kneels briefly in expectation, which is soon followed by the buzz of the clippers, which take his hair down to the skin. When the clipping is done, Sir takes to the captive’s chest with harsh blows. Sir’s cock makes its way down the prisoner’s throat, and Sir uses it to cut off his air supply before continuing to face fuck him. NOTE: Metalbond readers get 40 percent off their first month’s subscription to Iron Lockup!

The clippers buzzed as they came to life. The sound seemed to trigger a new spirit of resistance in Jimmy, who thrashed with new vigor while a garbled tirade spewed from his mouth along with a fresh batch of drool. It was minimal movement, to be sure, but just enough to annoy John, who clicked the power switch loudly, as if silencing the clippers to make a point.

“You keep this bitching and moaning up, and I swear, I’ll take your damn eyebrows, too.”

END_OF_DOCUMENT_TOKEN_TO_BE_REPLACED

No, fuck you! Since you flew out to San Francisco from Kansas City to be my rubber bondage prisoner for the next three weeks, you are going to get the buzzcut that I want you to have! And you’ll look great when I walk you down Castro Street on a leash. Today’s rubber and forced haircutting pictures are courtesy of the men over at Serious Male Bondage. Fuck yeah! It’s a pay site, but worth every penny in my opinion.